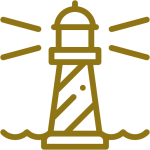 Together in one direction

The creation of the company vision is the task of the company management. It decides on the basis of its knowledge of the market, the business environment and the strengths and weaknesses of the organization and the opportunities and risks that the company is to develop from. The management communicates this vision to its employees.

A corporate guiding principle derived from the company’s vision offers employees orientation and security, it defines the framework in which their actions operate.

Which “values” determine our behavior?

The company’s guiding principle describes the principles of action by which the members of the organization are guided in their work.

It contains the values ​​that shape how we deal with colleagues, employees and stakeholders such as customers and suppliers, but also capital providers.

Formulating and introducing a corporate guiding principle is a time-consuming process that ties up some resources – not only because of the large number of participants, but also because it often raises questions and dilemmas whose importance was previously unknown. It is precisely because this process creates clarity in relation to many questions that affect many (latently) involved parties that the use of energy pays off. It ultimately causes a higher motivation and identification as well as a “moving together” of the entire organization, which also increases its clout.

The first step in developing a corporate guiding principle is usually an analysis of the values ​​as well as the thought and action patterns that currently shape the organization.

A target-performance comparison can then be used to determine where the greatest need for action is in relation to the overall organization as well as the areas and teams, so that an action plan for the development of the company can be designed in the direction of its vision.

Bottom-up procedures involve as many employees as possible in the process. 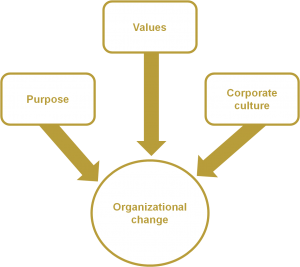